I am going to pick up from my last post to add more tips that may help in creating international elearning with Camtasia, especially if you are creating multiple versions of the same solution in multiple languages.

As I explained in that post, because Camtasia generates keyboard callouts in real-time, as long as you have the desired keyboard layout language installed, it can produce it for you while editing the video.

You may find yourself performing screen captures of pretty much the same sequence, with only minor differences, such as a language or version change. When you have a carefully crafted script, possibly translated to multiple languages, and a set of visuals and sequence already planned, any variations between screen captures will cause pain. 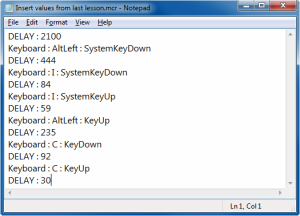 For these scenarios, I am using a macro solution from JitBit called Macro Recorder LITE. There are a couple of things I like about this macro recorder. The first is that it’s really simple: It has exactly the features I need and not a crowded interface with advanced functions that are just in the way. Second, the files this JitBit Macro Recorder generates are plain text files. I open them with a text editor, change the keystrokes that vary from version to version or language to language, and then I immediately have the entire sequence I need to capture, with the same timing, without errors, without effort. Speaking of timing, you can vary it with the text editor too.

Before you jump in, just one thing to ensure a smooth start: Camtasia Recorder and JitBit Macro Recorder LITE use the same system-wide hotkeys. The first task when trying them together is to change JitBit’s Start/Stop Recording hotkeys them so there’s no clash.

Sadly, Camtasia has trouble capturing the mouse cursor when controlled with JitBit. This is not a concern if you work is mostly with the keyboard. But if the mouse cursor is important for your recording, try Mouse Recorder – Camtasia seems OK with that one, although you won’t be able to do plain text editing of macros, they use a proprietary format. Although Mouse Recorder has some editing capabilities, it doesn’t allow file-wide changes such as a search and replace.

Bitmaps are your friends… for once

In the software localization industry, bitmaps are a known evil. Every time software contains a bitmap with text, it causes lots of extra work, because the bitmap needs to be re-rendered with translated text. It is a basic rule of international software authoring that bitmaps with text are always avoided.

However, when it comes to creating multiple-language versions of Camtasia videos, I am doing exactly the opposite: I use text-containing bitmaps whenever I know that a simple bitmap change will solve my localization problem.

The reason? Camtasia is very forgiving when it comes to missing media. Say you have created a new keystroke as I described in my previous post. Let’s say it’s the Shift key. Your Camtasia project has that media in the Clip Bin, and it features in your video ten times. 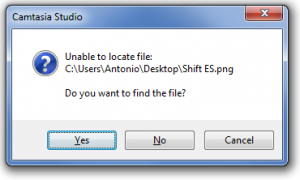 Camtasia sees the bitmap for my Shift Spanish key (deleted deliberately) is missing, and asks me to provide a location. If I provide the location of the French Shift key instead, that takes care of its translation in the whole project.

Now you move on to the next language version of the same piece. You can start from scratch, and insert or replace the corresponding version of the key ten times, or you can simply delete the bitmap you want to replace and open the project. Camtasia will notice the missing piece, and give you the opportunity to locate it. All you have to do is provide the location of the new bitmap, and Camtasia will insert it as in the original project. Of course, Camtasia won’t mind if the bitmap happens to contain a different version of the text.

What this means is no-edit localization for any resource that came in bitmap format. Yes, that’s right: Zero minutes editing time to get bitmaps in videos localized into multiple languages. Just delete bitmaps, get prompted for the location of their translated version, and save as new project.