If you are engaged in creating international elearning with Camtasia and like it as much as I do, perhaps you are wondering how to make the most of keystroke callouts when using other languages. Here are the glitches and workarounds I have found so far.

Camtasia Recorder does more than just capturing the screen: It also quietly takes note of what keys (other than plain letter and numbers) are being used, and also when they are being pressed.

When you add your recording to the timeline, you can make use of this great feature by right-clicking on the video segment and then selecting the last option, Generate Keystroke Callouts. 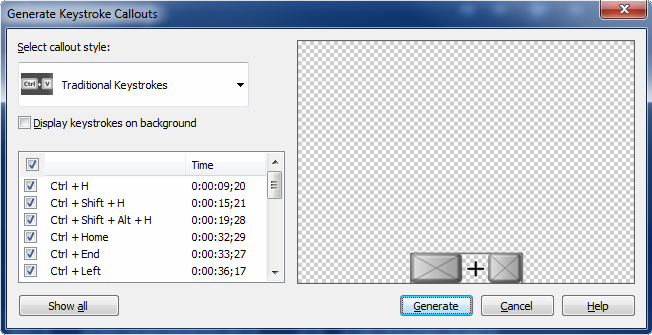 The Generate Keystroke Callouts dialog will appear. There are a few options to select the appearance of the callouts, and a preview. More importantly, there is a list of keystrokes logged by Camtasia Recorder. It is not the full list: By default, only key combinations (such as Ctrl+Home) are shown. If you want to include single keys as well (such as Enter or Esc) then make sure to click on the “Show all” button first.

Finally, click on Generate and Camtasia will place keystroke callouts right at the time in the video when the keys were actually pressed. A great feature, a great time saver… if you are creating English-only elearning.

Well, the answer is probably “Un poco” (a little). Although Camtasia may never be available in Spanish, and it looks like Techsmith scaled back its French localization efforts, it is clear that Camtasia wants to be multilingual when it comes to keystroke callouts.

If you are using a computer configured with more than one language (I’ve tried French and Spanish) Camtasia will insert the keystroke callouts in that language. Thus, if the recording has captured Ctrl+Home, during edition in Camtasia Studio the Generate Keystroke Callouts feature will yield Ctrl+Inicio, the correct key names for that combination if the computer is set to Spanish.

Here’s the best part about generating keystrokes: It doesn’t really matter what keyboard layout you used during the recording. You can perform all recordings in a computer set up with just an English keyboard layout. This is because Camtasia is recording the key mappings, not the key names.

The crucial stage is when you invoke the Generate callout dialog from within Camtasia Studio, during video edition. If your computer is configured with multiple keyboard layouts, all you have to do is switch to the language you want the callouts in (by pressing Alt+Shift or Windows key+Spacebar repeatedly until you get to the desired layout, as indicated in the Windows taskbar) and then use Generate callouts.

If you are in the business of producing multilingual elearning, this is a very nice feature. Although some captures are language-dependent and require separate recordings, there are also instances where a single recording is valid in multiple language projects just by generating the keystrokes again in the target language.

This is especially true in multinationals where the application software may be available in a single language, but is being used by employees of many nationalities, with equal training needs.

There is bad, unfortunately. I am currently working on a Spanish project and, alas, I won’t be able to use the Generate Keystrokes functionality “as is”, without a lot of additional work. The reason is that while Camtasia knows exactly what keys are being pressed and has demonstrated its ability to speak languages (at least with keys), some generated callouts don’t name keys correctly. Here is my snag list for Spanish:

There are also some keystrokes that are not necessarily wrong, although I don’t see the need to spell them out, just as they aren’t in the English keyboard. When you spell out “left arrow” instead of showing a left arrow… well, it takes a lot of space and calls for a very small font, as shown in the sample below.

If you have used Camtasia before, at this point you are probably thinking that you can create your own callouts to match the style of the keystrokes and place them over the offending ones.

But alas, Camtasia doesn’t use any of its own native callout styles to create the keystroke callouts. It uses something else. So no matter what you do, the callouts you create within Camtasia will never look like the keys produced by Generate keystrokes. You need to clone them, use some graphics application to craft the correct keys at the resolution of your project, and then place them.

The number of keys that are wrongly displayed for Spanish is not too high. Therefore, instead of making all keystroke callouts from scratch, I’ve decided to use the Generate Keystrokes functionality with some editing work afterwards. That means I had to create the Spanish keys I believe should be there. I used the “Traditional keystrokes” style, with no background, no shadow. Feel free to download them (links in the table above) for use in your projects. You may also need the plus sign. 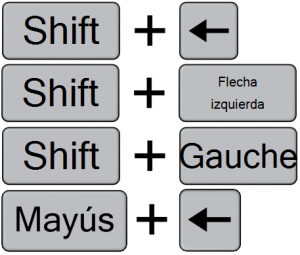 By the way, if you want to create your own, I’ll save you the guesswork: The font is Kartika, or at least it’s close enough. It wouldn’t have been my first choice of font, given its kerning… but I’m getting picky.

But this workaround won’t change the frustrating fact that Camtasia can handle multilingual keyboards but doesn’t do it well right now.

I get the fact that Techsmith have decided not to localize the product due to low demand. But even assuming Camtasia remains forever an English/German product, all Techsmith have to do to get their Spanish and French keys right is ask. If they want to go further and offer a Generate keystroke feature that is truly multilingual and future-proof, I can think of at least two approaches that would not take much refactoring work. One involves mapped libraries, and the other text-based layout files. That’s right: Community-based layouts to suit all tastes. We are many eager users, we speak many languages, and all we are missing is the tools to get to work.